Jenny Story was born in Yellowknife NWT however lived the majority of her years in Vernon, British Columbia however three years ago moved to Vancouver, BC to go to Vancouver Film School for Animation.

Jenny Story was born in Yellowknife NWT however lived the majority of her years in Vernon, British Columbia however three years ago moved to Vancouver, BC to go to Vancouver Film School for Animation. Jenny has since graduated and is now a Professional 2D Classical Animator and a 3D Digital Character Animator. This is Jenny's first novel and she has done her own illustrations for the book. She is planning on a trilogy and has already started writing the second book. Jenny has been recently announced as Official Spokesperson for ANCA World of Autism Festival and she is also a nominee for the award for Literature Arts for ANCA because of her writing and her novel Dysnomia. amazon.com Written works: Dysnomia: Outcasts On a Distant Moon (2015) · Dysnomia: Home Lies in Your Heart (2021) Janet Walmsley was born in Brandon, Manitoba, Canada. She is the youngest of three girls. She did acting in Elementary and High School. Then went to College and University for Dental Assisting and Hygiene, which she did for 27 years in Manitoba, Germany, Yellowknife,NWT and Vernon, BC, Canada. Later in life at the age of 41, Janet got back into acting in the Theatre, where she did a number of roles and directed the play, "Graceland"! One memorable character for her, is the role of Grumio in Taming of the Shrew! She was noticed by a professional actor and told her to go get an Agent and get into film and TV, which she did!! Janet is also a Talent Scout for MVM Agency in Vancouver. She teaches acting with her class, Shifting Lanes through Actor Van Studios. She is also an acting coach and works with actors to get their ducks in a row for acting packages to present to Agents. Janet is also a best selling publisher of her book, The Autistic Author and Animator, which is a heart warming, inspiration, enlightening and engaging true story of her Daughter's journey with Autism!! SHOW LESS 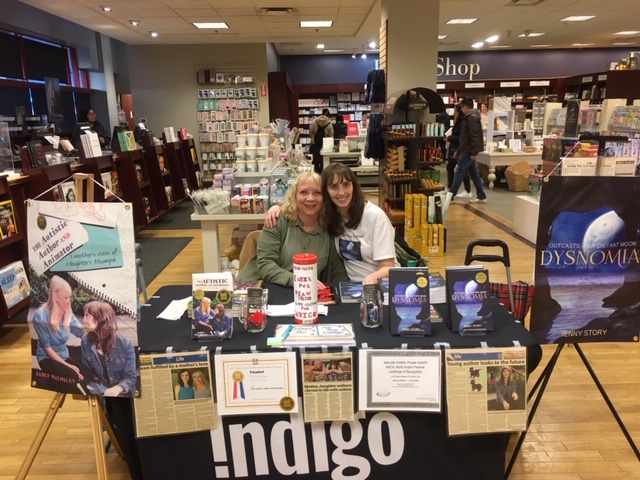 The Autistic Author and Animator

Bio for Janet Walmsley:
Janet Walmsley was born and raised in Manitoba. She was a Dental Assistant and Hygienist for 27 years and then switched over to a Head Marketer position for a Company. Then later in life, she became a Professional Working Actor, Talent Scout, Acting Teacher and Coach. Janet was nominated for Best Supporting Actress for a Comedy in the ISA Awards in Los Angles and then won the Unlimited Woman Award for Creativity at the Unlimited Women’s Award. Janet is an advocate for shining a positive for Autism, as her daughter, Jenny was diagnosed with it. Which prompted her to write a book, “The Autistic Author and Animator”, about Jenny’s journey, through her eyes. Janet is also a 7 year Breast Cancer Survivor, so an advocate for this as well.
Bio for Jenny Story:
Jenny Story was born in Yellowknife but lived the majority of her life in Vernon, B.C. She then moved to Vancouver in 2011 to attend Vancouver Film School and became a 2D and 3D Animator. In addition to her work with animation, Jenny has done short animated films/illustrations and her most recent short film is,” Sparkles Loves Bacon”. Jenny is a Best Selling and Award-Winning Author of her YA Fantasy Fiction Trilogy book, “Dysnomia”, books one and two are published and getting quite the following, she is working on the third book to the series. Jenny is also finishing up on writing the script to the first book as going to make into Trilogy Movies or TV Series. And she does Background Acting. Jenny won a Literary Award at the World of Autism Festival and just recently won the Autism BC Self Advocate of the Year Award. Jenny also had a documentary film done by Telus Optik TV about her journey with Autism Despite being diagnosed with Autism; Jenny has always remained focused on pursuing her dreams and is passionate about inspiring others to do the same. Jenny had a documentary film done by Telus Optik TV about her journey with Autism.